Exiting news – We are Building a dedicated Queen rearing shed

We have been very busy during the start of this year working on a very special project. With demand for UK bred queens still increasing, we made the decision last year to build a new building to help us produce more queens. This building will help us rearing more queens and, most importantly, have a new clean room for inseminating queens.

Shovels hit the ground in early February. Admittedly, this was a bit optimistic and after marking out the building footprint we made arrangements to bring a digger on site. Before we could really get started though, there were some more important things to deal with. Right after receiving planning permission , we were very pleased to introduce our new born daughter, Evelyn, into the world. Understandably, we delayed getting on with the ground works for a while.

The digger moves in.

Once we had the digger on site we started the groundworks. The first task was to level the site which resulted in a large mound of earth which is currently being used as a playground. Unfortunately, the heavy clay soil combined with a sprinkling of rain resulted in a bit of a mud bath. To remove the excess water we laid in a land drain from the back of the site to the front.

The next problem was stopping the clay from rising up into the hardcore. Clay is an excellent lubricant. This means that the wet clay coats the hardcore making it almost impossible to pack it down hard. To resolve this we careful scrapped off all the hardcore already on the site. We then lay down a geotextile woven membrane to separate the clay from the new hardcore. Unfortunately, by the time the scalpings arrived, the digger had already been return. We were lucky enough to be able to borrow an Avant from Quince Honey Farm to spread the hardcore.

With the groundworks complete, we could finally look at building up. The shuttering for the concrete went in and a damp proof membrane was laid. When the concrete lorry turned up it was an intense couple of hours to spread and level it. After which a long awaited break was had, but only for a few hours. It had been decided to powerfloat the concrete pad. Having never done this, it was truly a learning experience. Despite working the pad the whole weekend, and the numerous mistakes, we achieved a nice finish.

The frame work started going up once the concrete had hardened off. Fortunately we had been lent a scissor life by Langaton Steel Fabrications. This made it much easier to lift the trusses and purlins into place. All the steel work and timber work had previously been done in-house in the weeks leading up to this moment. Once the frame work was up, we set straight to putting in the external walls. At this point it did seem like the end was in sight, though its amazing how much heavier the timber was at the end of the day compared to the start.

The skin goes on

Once the external walls started going up, they were covered externally with a foil thermal and water barrier. This will serve to keep the heat in and water out. This was held in place with batons. Again, this was made so much easier with the scissor lift. The extending platform came in use allowing us to cover the outer gable end with ease.

A lovely bit of feather edging

As each wall was covered with the insulation, it was feather edged to avoid any damage due to the weather. Once the external walls were clad, the roof went on. Again, we used a foil insulation under the roofing sheets. The roof we chose was a big 6 cement fibre roof. This roof provides some structural stability to the roof and matches in with the surrounding buildings. It took three of us to complete the roof due to the weight of sheets and having to cut mitre joints. We struggled a bit on one side as the mound of spoil meant we couldn’t get the scissor lift in to position.

With the walls up and the roof on, we quickly got the windows in to keep the weather out. The doors followed a little while after, unfortunately there were some delays in receiving them all. The main double doors were fitted long ahead of the personnel door. Once the building was weather tight we turned our attentions to the inside.

Once I have a bit more time towards the end of the year I will write another update on how the internal work went and how the year was once we got moved in.

We are now offering Beekeeping Courses

We are pleased to say that over Autumn and winter we will be running  beekeeping theory courses. It has been a long time in the making. Having found a suitable venue, Quince Honey Farm in Read more…

The Year so far

This year has certainly been an odd one so far. With the weather and COVID19, it has been hard to plan ahead. With things beginning to calm down, we will hopefully have an uneventful rest Read more… 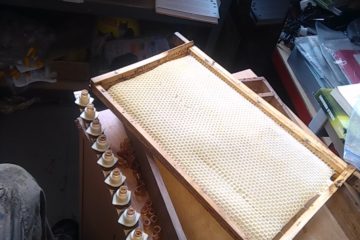 We rear our queens for instrumental insemination here in the UK at our farm in North Devon. We’ve been really busy grafting more queens for II. These queens are ideal for use as breeders for Read more…